A burn-down chart tracks the progress of a team toward a goal by visualizing the remaining work in comparison to the available time. So far, so good. More interesting than reporting a status, however, is the fact that burn-down charts also visualize Scrum anti-patterns of a team or its organization.

Learn more about discovering these anti-patterns that can range from systemic issues like queues outside a team’s sphere of influence and other organizational debt to a team’s fluency in agile practices. Burn-down charts have become popular to provide team members as well as stakeholders with an easy to understand status whether a sprint goal will be accomplished. (Critics of the burn-down chart may note, though, that a scrum team should have a gut feeling anyway whether the sprint goal is achievable.)

Hence, this post is focusing on another useful aspect of burn-down charts: they are equally well suited to provide additional insights into all kind of impediments, both at a team level and at an organizational level.

The following graphs visualize four of the typical anti-patterns that can be easily detected with burn-down charts:

The product owner accepts or rejects tasks only late in the sprint: 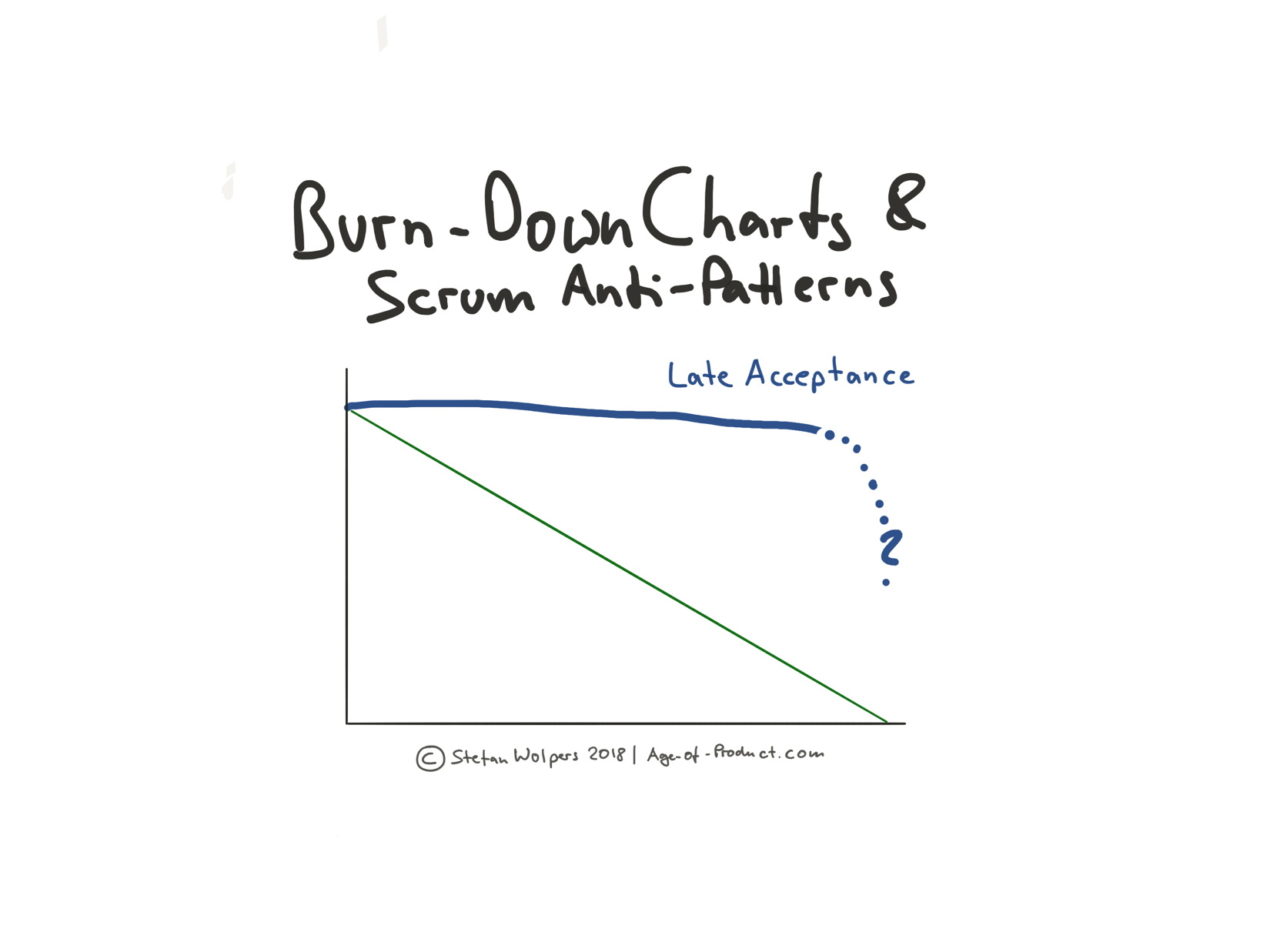 This behavior may be rooted in various issues, for example:

In this case, the graph is located above the line of the expected progress for the complete sprint length: There are several reasons why this might be the case:

The scope of work increases over the course of the sprint: Most of the time, this pattern can be attributed to inadequate preparation:

The team accomplishes the sprint goal way earlier than expected: Of course, an early finish is the anti-anti-pattern if the team figured out how to deliver a task with much less effort than expected. Or the sprint goal could be achieved with fewer tasks that planned.

However, the positive news might also hint at some problems. Again, the reasons for this phenomenon are multi-faceted. My two top-candidates are:

Note: These anti-patterns are only recognizable if the team provides the necessary transparency.

It is a good idea to use burn-down chart patterns for the next retrospective as they easily identify team problems or systemic dysfunctions. And utilizing burn-down charts in that capacity does not even require switching to story points per se—equally sized stories can just be counted to create a dimension for the y-axis.

Speaking of which: At the team level, I would suggest creating a rotating scheme of team members to update the burn-down chart daily. It is a team exercise and not the job of the scrum master.

Lastly, no matter what purpose you are using burn-down charts for, avoid falling into a common trap: Start counting subtasks. This accounting will quickly lead you on the track of abandoning your definition of done. Instead, you will start marking tasks as 90 % complete. Welcome to cargo cult agile—how would that differ from the waterfall approach?

What scrum anti-patterns that burn-down charts can reveal are missing? Please share with us in the comments.