Join more than 34,000 professionals who subscribe to Food for Agile Thought

Age of Product’s Food for Thought of February 14th, 2016 covers: The art of product management, how to ship product in time, lean idea validation, key drivers for SaaS success, 20 questions to get up to speed with a new Scrum team, a compact guide to DevOps and continuous delivery, how Facebook ships code more than 1,000 times a day, agile base patterns, how to foster a sense of purpose, doomicorns: how unicorns reached the tipping point, and the resetting of the startup industry.

Mark Suster: The Resetting of the Startup Industry

The startup industry may be “resetting,” which doesn’t mean a “crash” but rather just a resetting of valuations, timescales, winners/losers, capital sources and the relative emphasis of growth rates vs. burn rates.

Source: The Resetting of the Startup Industry

This morning, the law firm Fenwick & West published new findings about all the U.S.-based unicorn financings that took place during the last nine months of 2015. It’s rife with interesting nuggets, but perhaps most fascinating is that in the fourth quarter of last year, half of the 12 rounds it tracked featured valuations in the $1 billion to $1.1 billion range — and with terms that were far more onerous than earlier in the year. 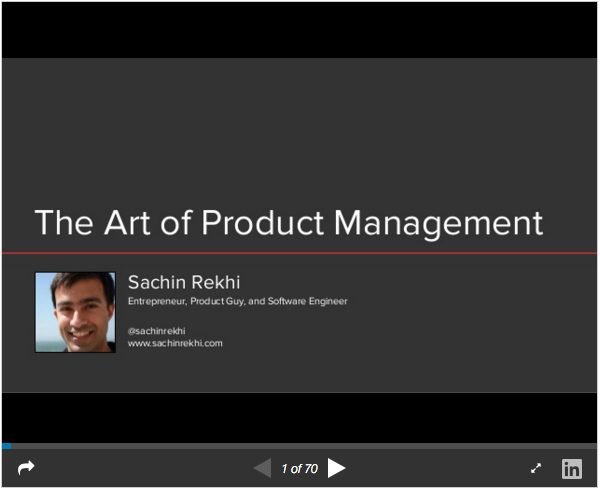 Product managers drive the vision, strategy, design, and execution of their product. While one can often quickly comprehend the basic responsibilities of the role, mastering each of these dimensions is truly an art form that one is constantly honing.

Source: The Art of Product Management

Rob Walling: How to Force Yourself to Ship (Even Though It’s Hard)

Fear of shipping: "Had we not committed to a deadline, in public, 2-weeks prior to the ship date, I believe we’d still be adding finishing touches."

It’s scary to ship. And it’s in our nature to want everything to be perfect before doing so. When working in tandem, these two forces can keep you from shipping for far too long.

Source: How to Force Yourself to Ship (Even Though It’s Hard)

David Skok (via For Entrepreneurs): SaaStr Slides: The Key Drivers for SaaS Success

Based on a talk given at the SaaStr Annual Conference in San Francisco, this slide deck offers a comprehensive and detailed look at the key metrics that are needed to understand and optimize a SaaS business, and how these can be used to drive SaaS success.

Stefan Wolpers (via Age of Product): 20 Questions a New Scrum Master Should Ask Her Team to Get up to Speed

20 questions for you — the new Scrum master — that fit into a 60 minutes time-box. Start learning how the new Scrum team is currently working and get up to speed. Download an easy printable template for your convenience.

Source: Age of Product: 20 Questions a New Scrum Master Should Ask Her Team to Get up to Speed

Suzie Prince (via Mind The Product): The Product Managers' Guide to Continuous Delivery and DevOps

I am here to demystify these practices [CD, CI, DevOps], tell you just how important they are to you “on the business side” and help you get involved. It’s not that complicated, we have pictures and everything.

Source: Mind The Product: The Product Managers' Guide to Continuous Delivery and DevOps

Facebook believes in getting early feedback and iterating rapidly, so it releases software early and frequently: Three times a day for frontend code, three times a day for for backend code. I am amazed that Facebook is able to maintain such an agile deployment process at that scale.

Lyssa Adkins (via InfoQ): The Agile Base Patterns, a Cross-Quadrant Conversation

Conversation on the “Agile Base Patterns in the Agile Canon” paper by Dan Greening.

Basically I went through all the agile methodologies I could think of, looked at their particular practices, and tried to understand what the purpose of each practice was to serve agility. There are five of these patterns.

Source: InfoQ: The Agile Base Patterns, a Cross-Quadrant Conversation

Kimber Lockhart (via Medium): Don’t create a sense of urgency, foster a sense of purpose.

I lead software teams. Part of the territory is people (CEOs, stakeholders, customers) wishing we could go faster. I’m often asked — “do you think the team has a strong enough sense of urgency?” or the direct “can you make the team feel a stronger sense of urgency?” More often, the request is more subtle, but just the same — “I’d really like to get this one project done, but it’s not a top priority. Can you hustle to make it happen?”

Source: Medium: Don’t create a sense of urgency, foster a sense of purpose.

Mary Poppendieck: Lean is a Question, not an Answer

Over the last two decades, the software technology stack has undergone a rapid evolution. The evolution continues. Today’s world of smart phones is giving way to tomorrow’s world of smart devices with sensors and actuators and not much more. The app layer will only get thinner.

Source: Lean is a Question, not an Answer