TL; DR: Maximizing Utilization as a Relic from the Industrial Management Past

There are plenty of failure possibilities with Scrum. Since Scrum is an intentionally incomplete framework with a reasonable yet short “manual,” this effect should not surprise anyone. For example, what if the focus of the organization is on the maximizing utilization of the “workers” of the Scrum teams? What if the organization is still stuck deeply in industrial paradigm thinking, ignoring the benefits of slack time for the creation of value in the field of knowledge work?

Join me and delve into the effects of this outdated management principle in 60 seconds. END_OF_DOCUMENT_TOKEN_TO_BE_REPLACED

There are plenty of failure possibilities with Scrum. Given that Scrum is a framework with a reasonable yet short “manual,” this effect should not surprise anyone. One area that typically flies under the radar is improvements. While the Scrum Guide encourages addressing the most impactful ones as soon as possible, it is up to the Scrum team to figure out how to improve. One manifestation of this core team task we often encounter is picking unsmart improvements, though.

Join me and delve into the consequences of picking unsmart improvements as a Scrum Team in less than 90 seconds. END_OF_DOCUMENT_TOKEN_TO_BE_REPLACED

Can a Scrum team simply decide to abandon Scrum? After all, the Scrum team is self-managing, according to the Scrum manual, also known as the Scrum Guide. So, let’s explore this question at the very heart of team autonomy. 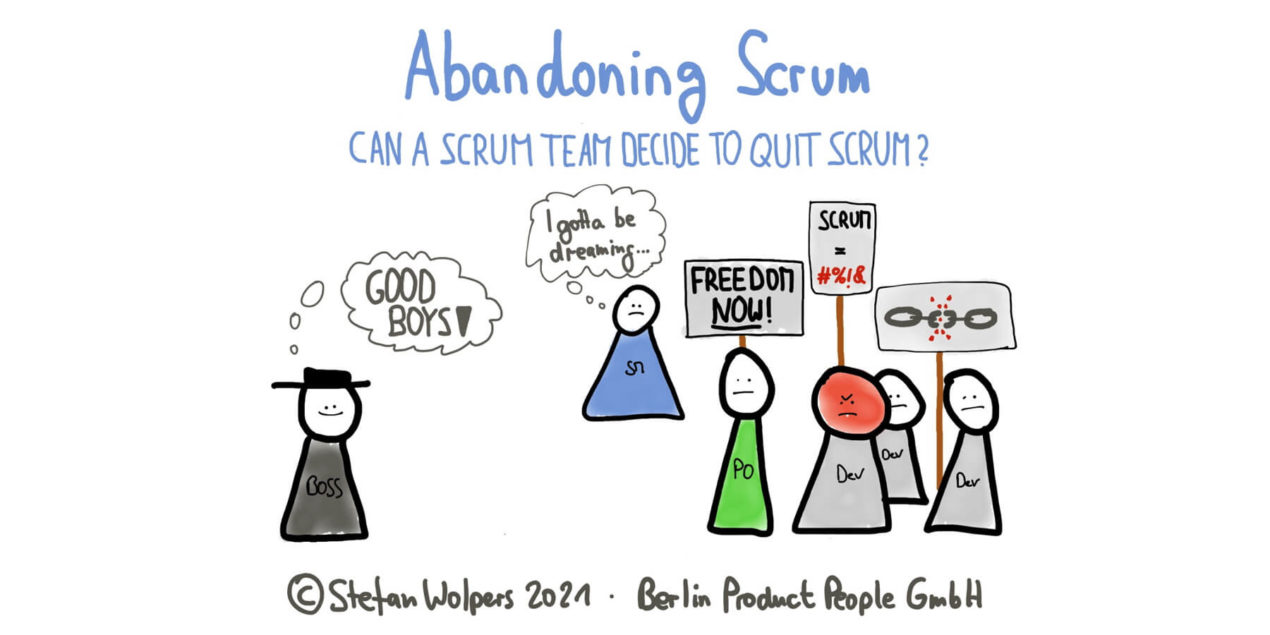 END_OF_DOCUMENT_TOKEN_TO_BE_REPLACED

There are plenty of failure possibilities with Scrum. Given that Scrum is a framework with a reasonable yet short “manual,” this effect should not surprise anyone. One of Scrum’s first principles is self-management. It is based on the idea that the people closest to a problem are best suited to find a solution. Therefore, the task of the management is not to tell people what to do when and how. Instead, its job is to provide the guardrails, the constraints within which a Scrum team identifies the best possible solution. Join me and explore the consequences of management ignoring self-management and what you can do about it. END_OF_DOCUMENT_TOKEN_TO_BE_REPLACED

There are plenty of failure possibilities with Scrum. Given that Scrum is a framework with a reasonable yet short “manual,” this effect should not surprise anyone. While it is common to first look outside our team for impediments, such as dysfunctional processes or other systemic issues, I would advise starting with the Scrum team’s way of collaboration: Are we aligned on the why, what, and how? Otherwise, the three following Developer blunders may diminish the team effectiveness.

📺 Join me and explore the consequences of these Scrum Developer blunders and what you can do about them in a little more than five minutes. Update: I am running a poll on LinkedIn—join the voting: “What common ways have you observed how Developers diminish the value creation of their own work?”

END_OF_DOCUMENT_TOKEN_TO_BE_REPLACED

What looked like a good idea back in the 1990ies—outsourcing software development as a non-essential business area—has meanwhile massively backfired for a lot of legacy organizations. While they try to become more appealing to product and software developers, they still have difficulties understanding what it takes to build an attractive product/engineering culture. Learn more about typical anti-patterns and signs that an organization is causing a toxic team culture, impeding its efforts to become agile.